With full access to all dining and recreation at both Kamayan sa Palaisdaan and Greenponds Corporation and complimentary resort shuttle, guests enjoy the most extensive on-site facilities of the resort. There are 3 restaurants, 2 cafes and 1 bar including the famous Kamayan sa Palaisdaan floating restaurant; 2 swimming pools, and an ecopark with lagoon, horseback riding and other outdoor activities.

Located at Barangay Dapdap, Tayabas City, Province of Quezon,the property welcomes you into an authentic experience. Enjoy an extensive native cooking as well as an nature ambience.

At Kamayan sa Palaisdaan, we believe that by giving our guests great food, relaxing ambience, and good service is more than satisfaction. We’re passionate about it, and our mission is to continue to bring friends and family together while experiencing our facilities

Kamayan sa Palaisdaan was founded by Rosauro Delos Santos and Evangeline Delos Santos in 1991. From humble beginnings, starting with only selling live tilapia to customers requesting to grill it for them on the spot. Starting with a single floating cottage, they built a restaurant that truly marked everyone’s life. Committed to deliver native food and nature ambience to the customers, Kamayan sa Palaisdaan continues to grow and develop.

For us, sustainability is not a proud idea but a fundamental, and necessary, endeavor. Our concept in Kamayan sa Palaisdaan is about the food and drink of course, but it’s also about our team, our facilities, our practices, and the of decisions we make each day that affect the environment around us. We believe it’s about finding a balance, which allows us to sustain our quest of making quality, accessible food, while also giving back to our community and the environment.

We promise to deliver optimistic and diverse service, continuing to provide unforgettable and pleasurable experience. 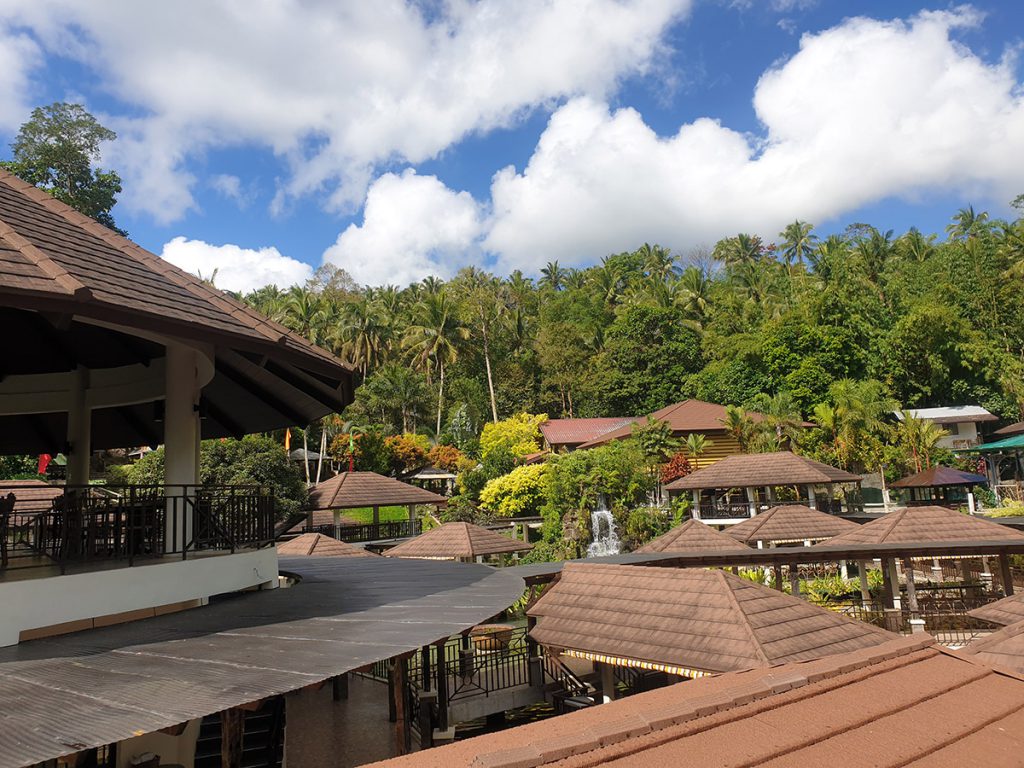 Located in Tayabas, Quezon, KAMAYAN SA PALAISDAAN is an ideal getaway restaurant for seafood lovers. The restaurant is a little hard to find – save for a sign that is lit up

in neon lights at night – but has a charming feel to it, with quaint nipa huts propped above a huge pond. Equally charming are the restaurant’s owners, Rosauro de los Santos and his wife, Evangeline who started this business 18 years ago. Ross (as he preferred to be called) was really into fish since he was a kid so he decided to set up a fish pond. Customers afterwards came to buy fresh tilapia from the fishpond, not a long time passed when customers would ask him to also cook the fish he sells. That’s how he started.

However, Kamayan sa Palaisdaan should not be confused with another well known restaurant of the same name – the original Palaisdaan Restaurant. Though only about half a mile apart, his family also actually owns the latter. He worked there for four years, before putting up his own business. In April 1992, he set up his own version of the family business for a reason that he wanted to make a living for him and to help the people around the neighborhood by giving them jobs. The pond took eight months to construct and the restaurant now has 56 bamboo huts plus two halls that can host 1,700 people.

Ross graduated with the degree Bachelor of Arts in Economics and worked as a controller in a big construction  company in Saudi Arabia, for five years, he was in the country when the Gulf War broke, and that is when he decided to come back to his country and establish his restaurant business which is known today as Kamayan sa Palaisdaan. He explained that what he keeps people coming back is the calm and warming atmosphere of the restaurant. There’s a breeze from the pond, and at night it’s very cool. So it’s something very different from the city. Surprisingly, the restaurant’s clientele ranges from senators to local farmers – and even the President. They try to keep their prices affordable, so even the local townsfolk can afford it. Kamayan sa Palaisdaan seems to get the most customers around lunch time, which is sometimes followed by a quick afternoon nap. It is almost a second home top most of the locals.

The menu consists mostly of fish, since Tayabas is known for their light and delectable seafood compared to Lucban’s meat fest. Big winners are the Inihaw na Pla-Pla (also known as tilapia), and the inihaw na Hito. All his cooks are native chefs, so one can expect an authentic taste of Tayabas in their dishes. Other dishes, worthy of praise are the Inihaw na Spare Ribs, Squid in Oyster Sauce, and their own version of Salpicao (mixed vegatable & seafoods).

Native designed function rooms for Cocktail parties, Conference, Wedding, Birthday and other Private Occasions. Formal and informal dining with lush appurtenances and grand artistically rendered interior furnishing and decor. When enjoying a banquet the surroundings and ambiance of the place transports one to the heady confines of the sophisticate and formal good graces inclined.